HORUS is a reference  stereophonic phono preamplifier for MM cartridges. Obviously, with the addition of a suitable external passive step-up unit, it is possible to work with any MC cartridge . 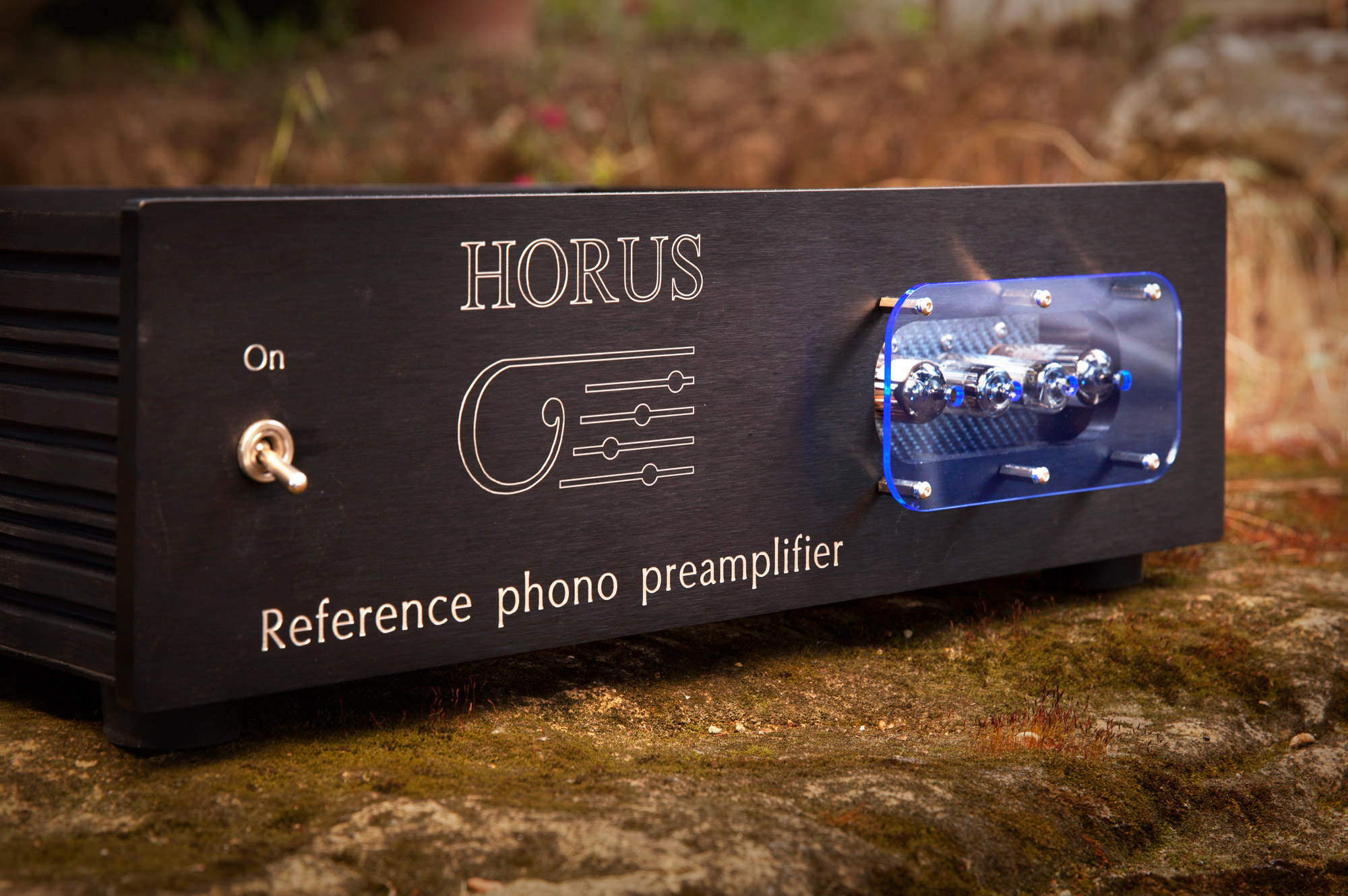 HORUS, like all Clinamen products, don't need of complicated circuits, because it is building around top quality and linearity passive and ative components. In this way it easy to achieve an extremely natural, dynamic and exciting sound.

No chatode follower, no feedback for linearize the response and reduce the distortion; all the electrical performance are obtained with natural way. For example, the subsonic filter is implemented using the natural roll-off of the output transformer used for interfaces the preamplifier with the outside world. Is there perhaps a more natural way? No added components, we only exploited the physical characteristics of the components according to our needs, without auxiliaries components. 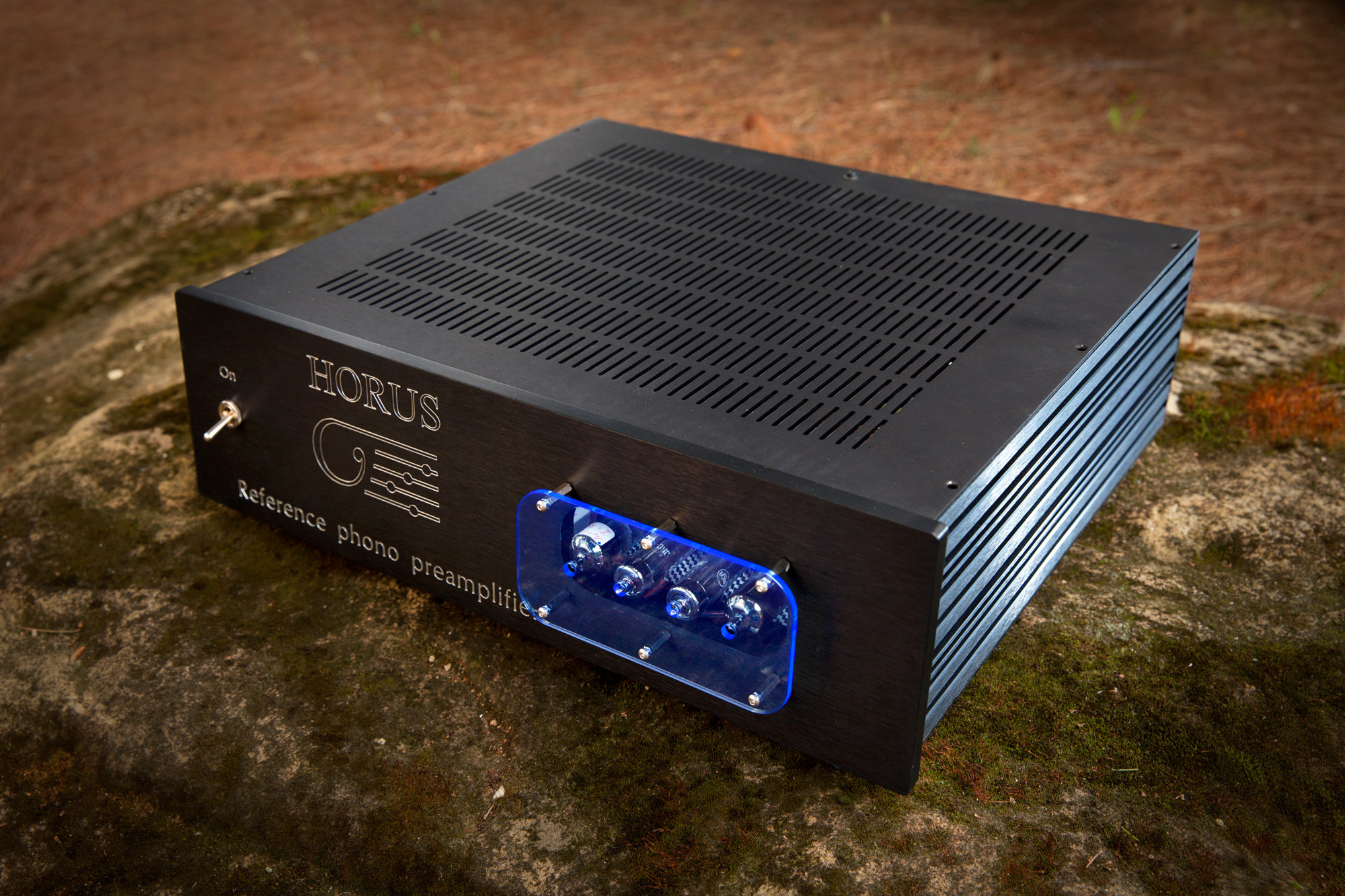 HORUS is a two-stage preamplifier made with high transconductance triodes which allow to combine high gain and low internal resistance. To maximize the triode's transconductance, the input stage is loaded with an anodic coil with a Vacoperm core, with symmetrical winding structure makes it immune to picking up external disturbances. In this way, the tenuous electrical signal coming from the cartridge is amplified with the maximum possible purity and sent to the totally passive RIAA equalizing network made with Japanese KIWAME resistors and mica and polystyrene capacitors.

On the HORUS front panel we have two controls for  input impedance settings. Many manufacturers leave the fixed impedance at 47 kohm, but the sound of an MC cartridge changes dramatically according with the impedance seen from the cartridge, in fact the resistive load acts just like an electromagnetic brake for the cantilver. Not providing this control severely limits the interfacing and optimization capabilities of the analog set up 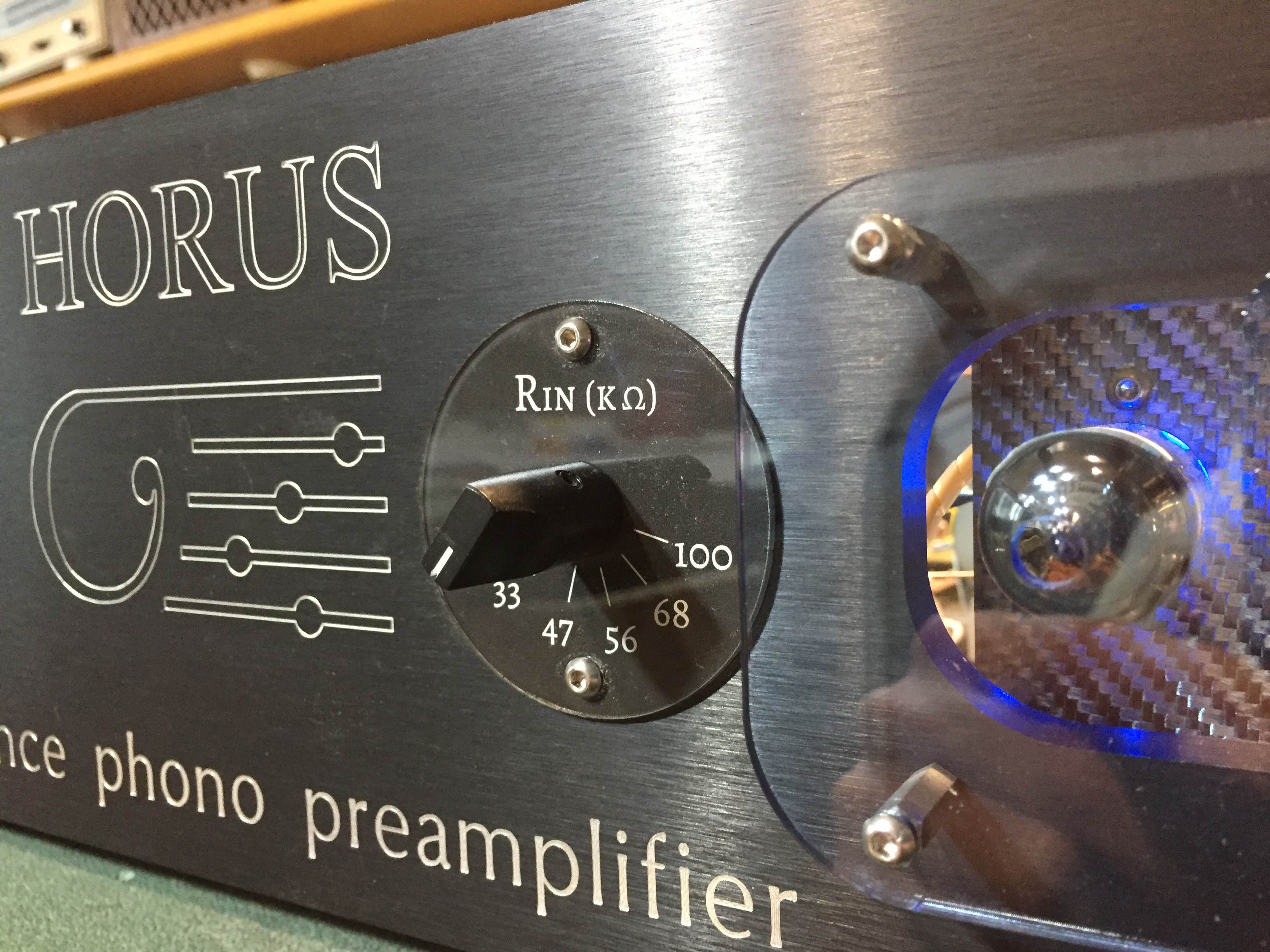 The low impedance RIAA ( it is possible use low resistors for build the RIAA network because the driver tube have a very low internal impedance) , allows to have an extremely low  value of  "thermal" noise. After equalization, the signal reaches the second and final stage, which provides sufficient gain combined with a low output impedance. The interface with the outside world is done with a Vacoperm output transformer in step down ratio. The transformer implements too a natural roll off  in the lower range, in agreemnet to a Subsonic filter requirement. Obviously, the transformer are custom made from Clinamenaudio

All stages are fixed bias polarization, for best timbre and vitality sound . 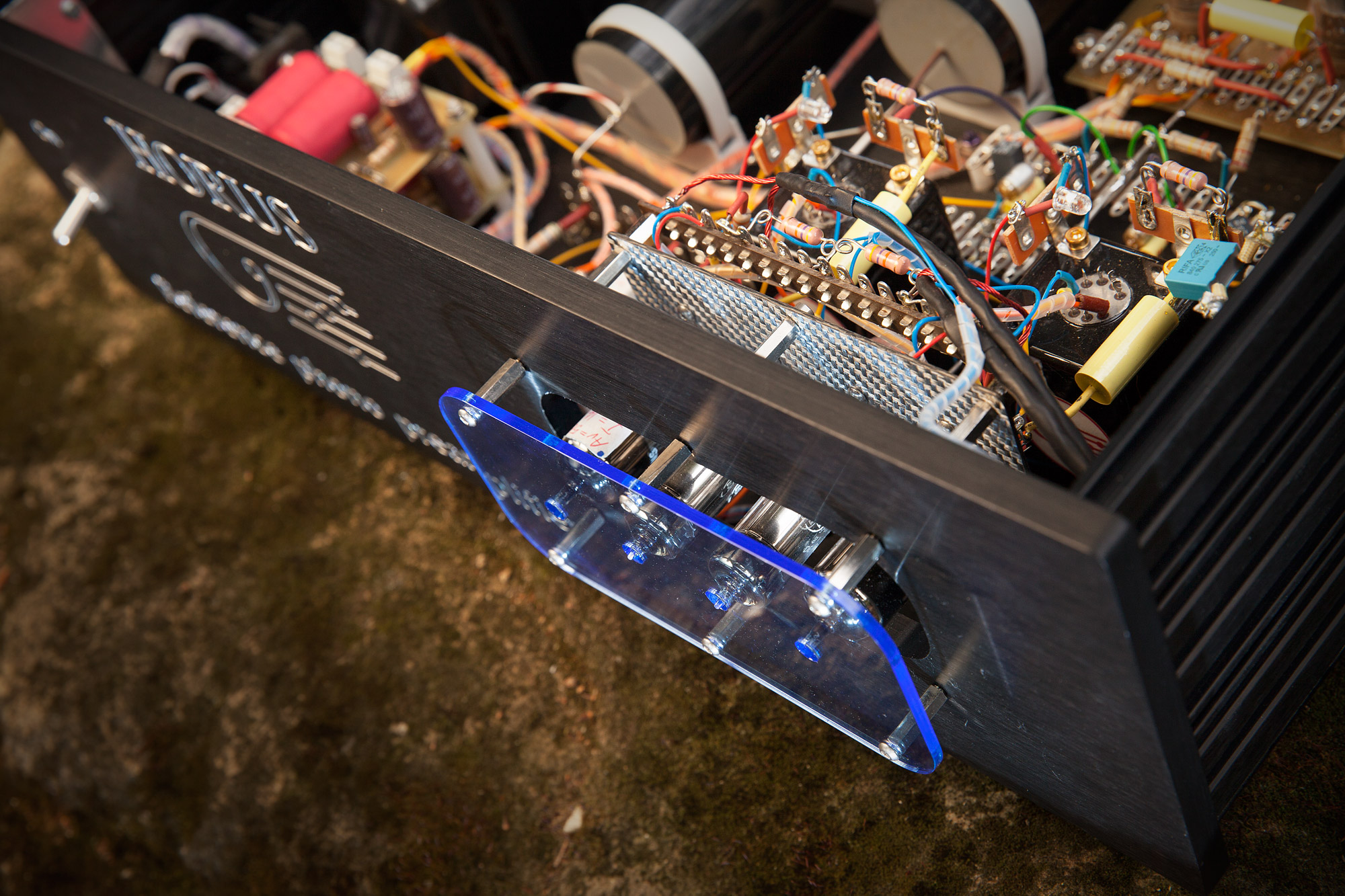 The P.S.U. is extremely accurate,  an EZ81 vacuum tube is used for rectifier the AC voltage in DC. The leveling of the rectified voltage takes place with a refined inductive filtering; all anode capacitors is polypropylene foil and no electroytic.  The input stages are stabilized with gas discharge tubes, the output stages are decoupled with indipendent L-C filters. 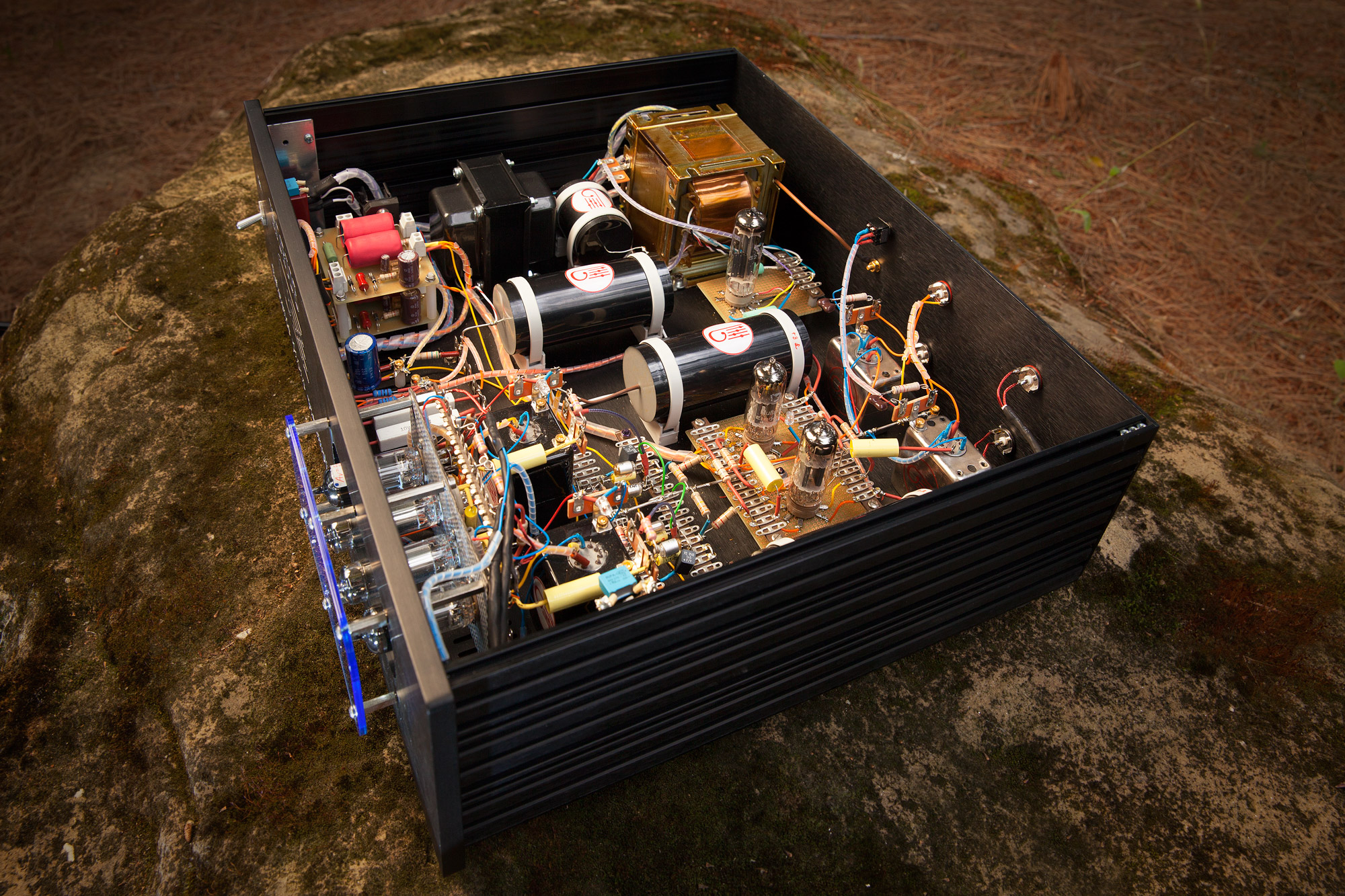