"Everything should be made as simple as possible, but no simpler"   Albert Einstein

CLINAMEN AUDIO is a partly technological partly idealistic project; its purpose is to build devices for the home fruition of music which ensure an emotional enjoyment as close as possible to the real event.

We are not subject to ideological bonds and financial logics; that’s why we think we are in the best position to achieve this mission.

Our guideline is simplicity that does not result in triviality; indeed it is the implementation of natural laws with intrinsically linear components. (‘Everything should be made as simple as possible but no simpler’, Albert Einstein). This concept translates into vacuum tube non feedback amplifiers and acoustic diffusers with high efficiency transduction. 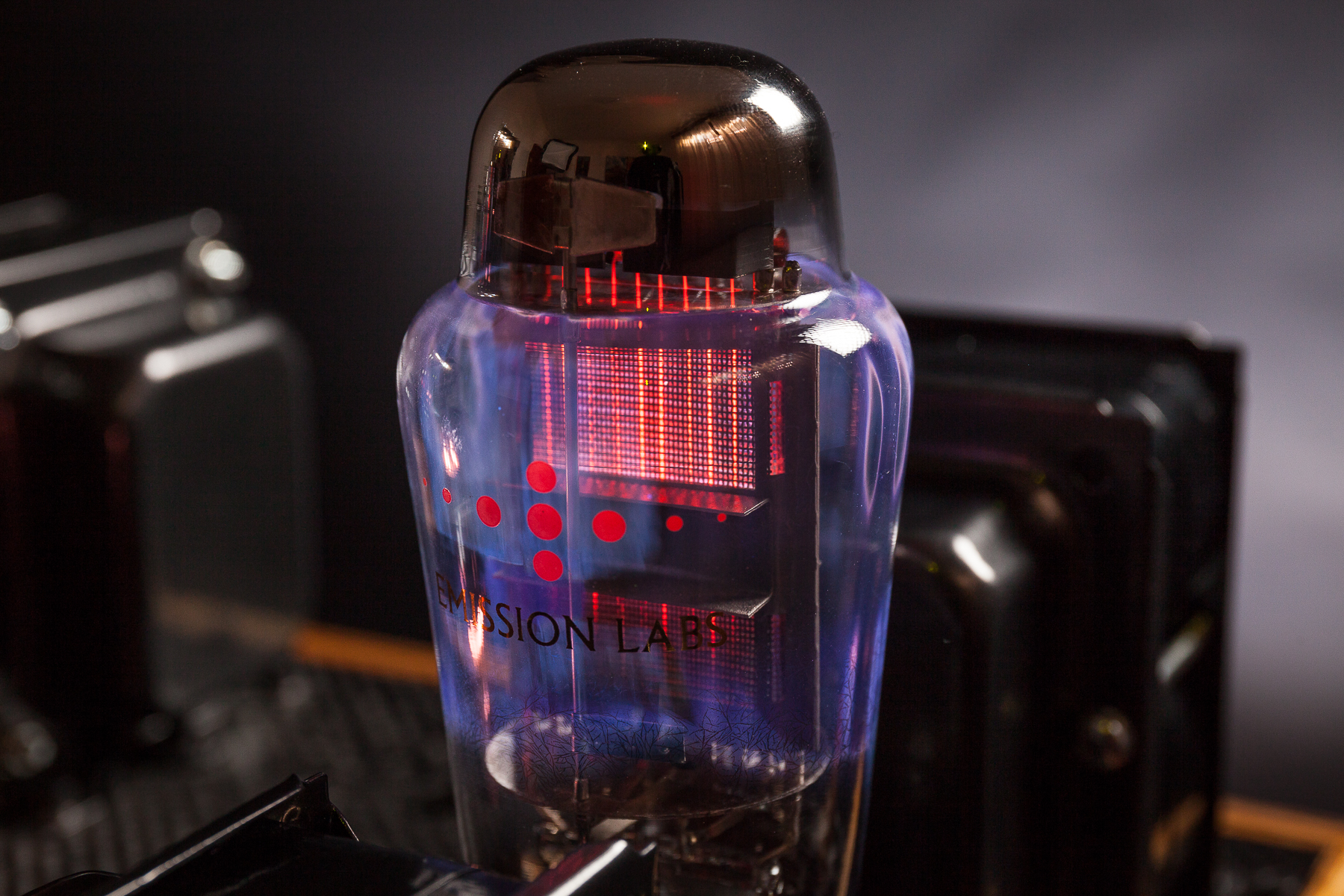 Unfortunately the logics of cost reduction and miniaturization have caused the disappearance of vacuum tubes from all areas of technology. This is justifiable in many fields but not in the audio field. Here the triode has undebatable and unsurmountable advantages. It is the simplest electronical device ever conceived and it can work without the help of surrounding circuits that stabilize its behavior (such as thermal compensation networks for transistors).

The usage of intrinsically linear and not unnecessarily complex circuits can indeed enhance musical performance. Clinamen electronics are created only after a thorough examination of the problems connected with the amplification of the audio signal. The right choice of the operating point of the active element together with high quality magnetic elements make it possible to completely get rid of feedback.

Feedback, essential in many electronic fields (see automation) is counterproductive in audio applications. It only improves electric performances but it heavily compromises the sound reproduced, with strong dynamic compressions, lack of vividness and naturalness.

The reason why it is heavily used in the audio field, even Hi-End, is that through it, it is possible to have high quality electrical performance with cheap components. It is therefore possible to industrialize the productive process that leads to economies of scale. In other words profits are maximized to the detriment of music.

Each circuit topology chosen by Clinamen is used in contexts that maximize its qualities and restrict its intrinsic faults. For example the usage of high transconductance triodes, in the signal stages, paired with the final stages through transformers with a nickel nucleus, allows to guide the latter with great swing, low distortion and musicality.

We think that it is not possible to produce powerful amplifiers with the highest possible quality, even disregarding costs. Hundreds of Watts are not necessary for a real reproduction of the musical event; a few watts supplied by non-feedback triode devices, optimized for musical performances, are able to ensure an explosive dynamic and a reproduction of the event full of emotions.

We can certainly say that our company enjoys originality and is not afraid to think outside the box. For example, in the field of electronics we have ‘invented’ the I.M.A. configuration, acronym of Integrated Monoblock Amplifier. In the range of the powers that we find interesting as far as quality home reproduction is concerned, (under 10 RMS Watts), a line preamplifier is a useless, expensive and redundant device. That is why we build monophonic amplifiers that combine the stage of tension pre-amplification, input selector and volume control. Thus we can offer our customers the best value for money, giving them the benefit of the separation of channels and saving them money by getting rid of the external unit of pre-amplification and the relevant interconnections.

As far as diffusers are concerned, we have our own special way of tuning woofers, called T.D.D.R. (Tuning Distributed Damped Reflex). In other words it is a very original bass reflex tuning that allows to vary the tuning frequency of the cabinet and give the user an important tool for adjustment depending on environment, taste and characteristics of the amplifier’s muffling. Furthermore the reflex port is very big and its opening has differential lengths. This gives a very clean tuning with many harmonics, which classic reflexes can hardly achieve. Finally, we often use resistive material to muffle the peaks of the impedance module of the woofer and ease the guiding from the amplifiers. 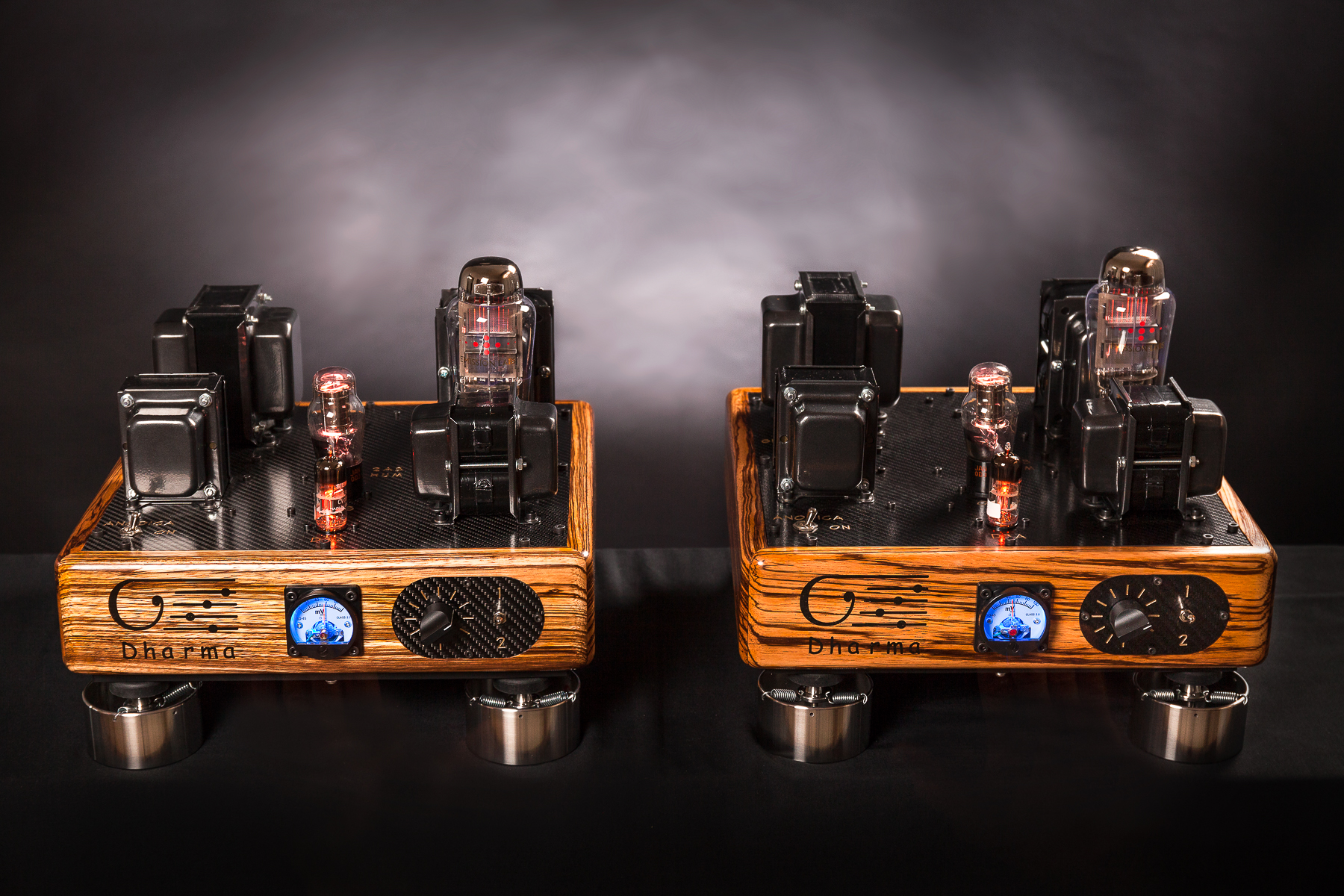 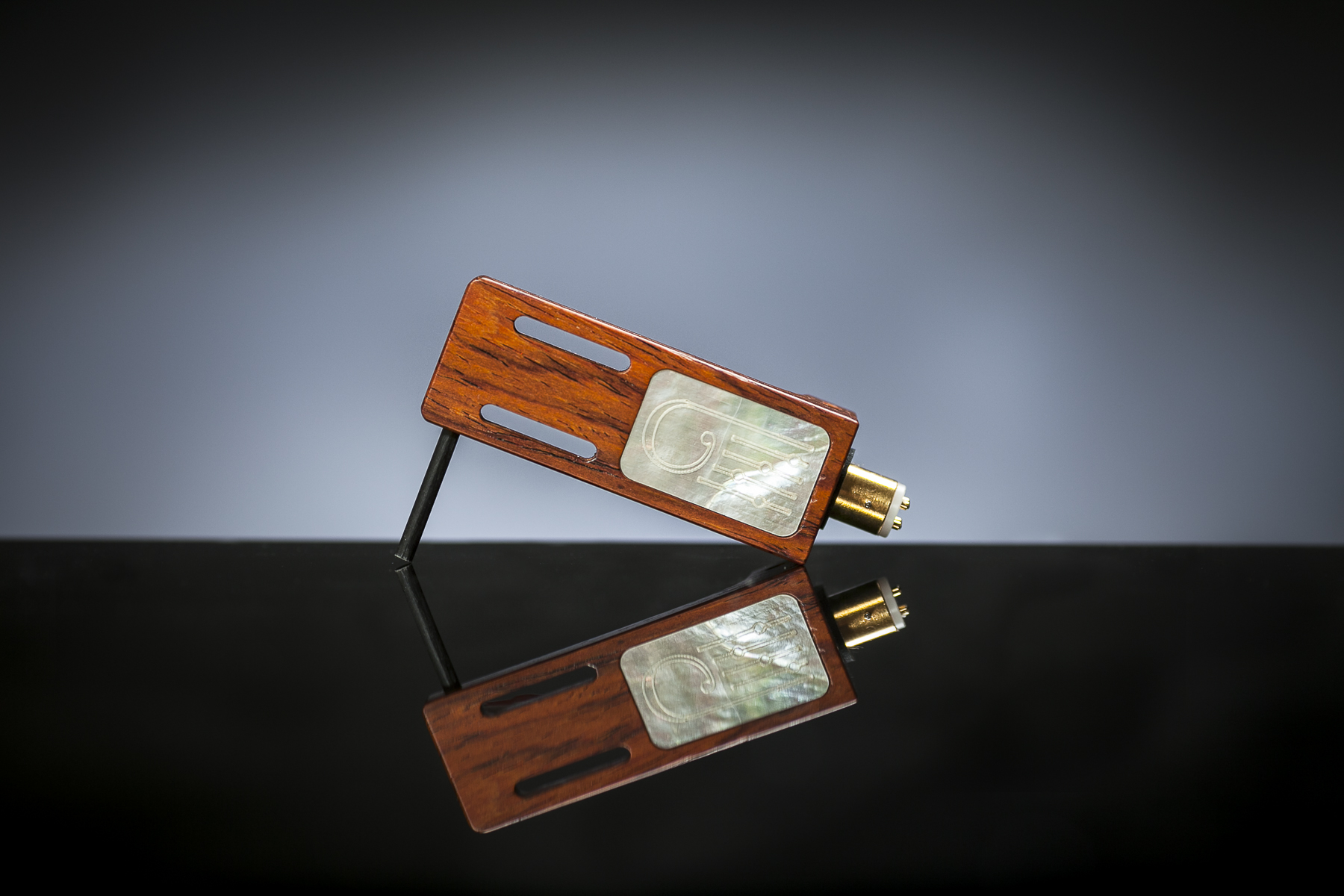 Clinamen emphasizes the stylistic refinement of its musical devices; like a work of art, we try and excite all senses of the listener. We associate technological elements such as carbon fiber with harmonic woods for woodworking, such as padauk, ebony, cocobolo, bubinga, rosewood, zebrawood, olive…

Perhaps the Clinamen production will not meet the favor of the general public because of the low power of the devices and the bulky size of the diffuser; our mission, though, is not notoriety but to supply a discerning and sensitive audience with the instruments to reach the heart of music.

Another element that we care deeply about is to spread audio culture. Do not think that this statement shows arrogance, but due to our studies and results we think it is very important to share them and inform the audiophile community.

One of the most critical elements of the audio system is the electroacoustic diffuser, because of its nature of transductor between two kinds of energy: electric and acoustic. Indeed the diffuser receives electric energy and ‘gives it back’ as acoustic energy, that is in waves of compression and rarefaction of air. Therefore it transduces electric energy into acoustic energy (the opposite of a microphone which transduces acoustic energy into electric energy). Each conversion is characterized by an efficiency η which measures its quality. Unfortunately by the law of physics this kind of transduction from electric to acoustic is characterized by an extremely low efficiency of energetic conversion (because of acoustic impedance mismatch between loudspeaker and air; basically the air struggles to vibrate under the stimulus of the loudspeaker).

Precisely for this reason a HI-End loudspeaker's major requirement should be to increase as much as possible this efficiency value. Horns or even waveguides (which we prefer) are a valid method to match acoustic impedances and therefore to drastically improve the transduction efficiency.

Just to give you an example, standard loudspeaker with a claimed sensitivity of 88 dB/W/m, have a conversion efficiency of 0.28%! Yes, you got that right; if we input 100 electrical Watts we will only get 0.28 acoustic Watts in output. The whole missing part increases the entropy of the Universe… 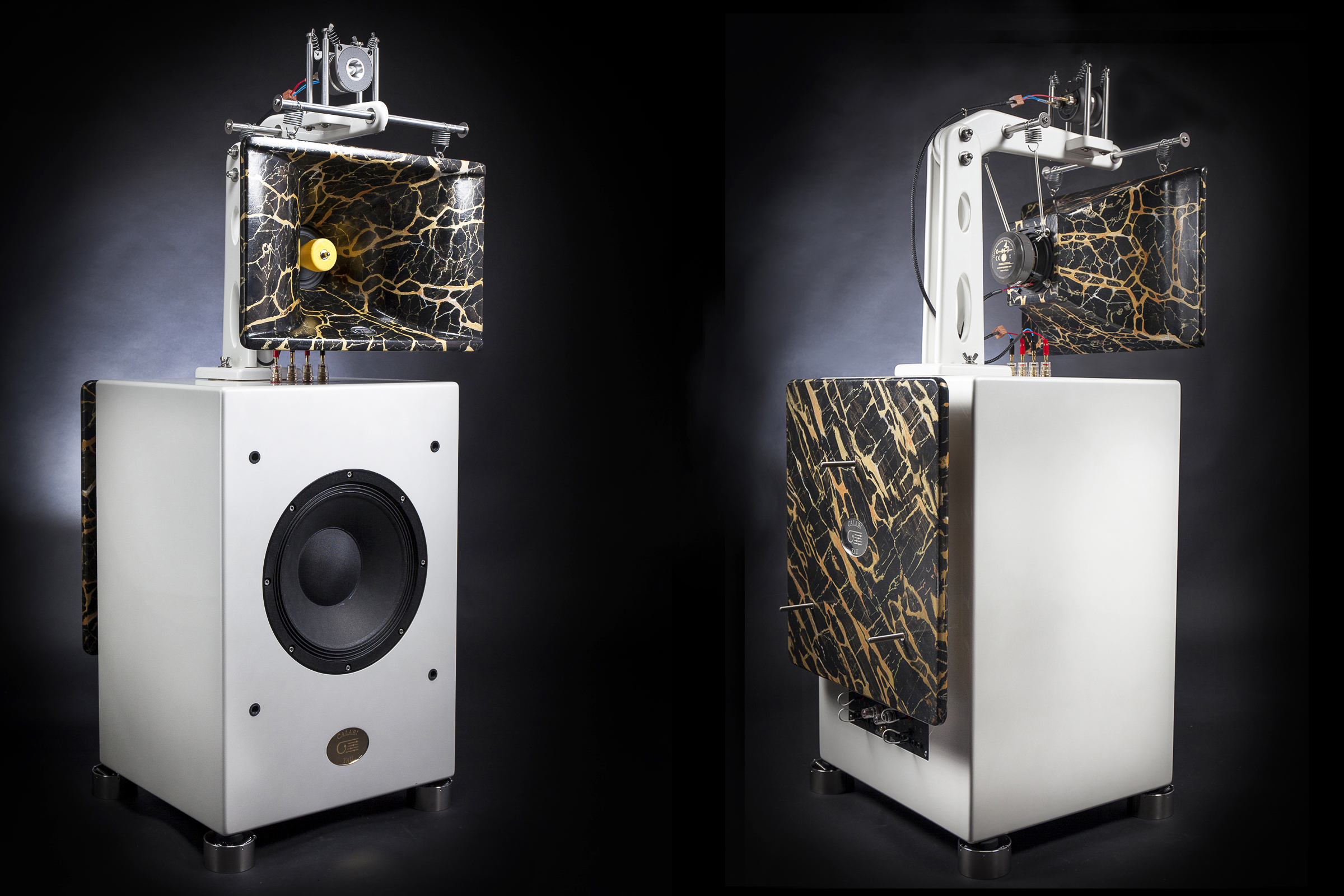 In engineering the research of high efficiency qualifies a good project from a mediocre one; it is not only a quantity issue, but a quality one as well.

Therefore it is easy to understand how most Hi-End diffusers on the market with electro-acoustic efficiency much lower than 1% should really not claim to be Hi-End.

The creation of solid state amplifications with high power made the issue of efficiency quite a ‘negligible’ one. Indeed the availability of low cost watts has caused a kind of regression in the Hi-Fi world.

We can compensate the low efficiency of electro-acoustic conversion of the diffuser by applying great electrical powers, in order to obtain high acoustic pressures. But this method shows very little elegance; it leads to acoustic results lacking emotion and realism. To give you an example, it would be like taking cholesterol tablets; the cholesterol value goes down but not naturally. The body is apparently healthy but it is in actual fact ‘ill’. 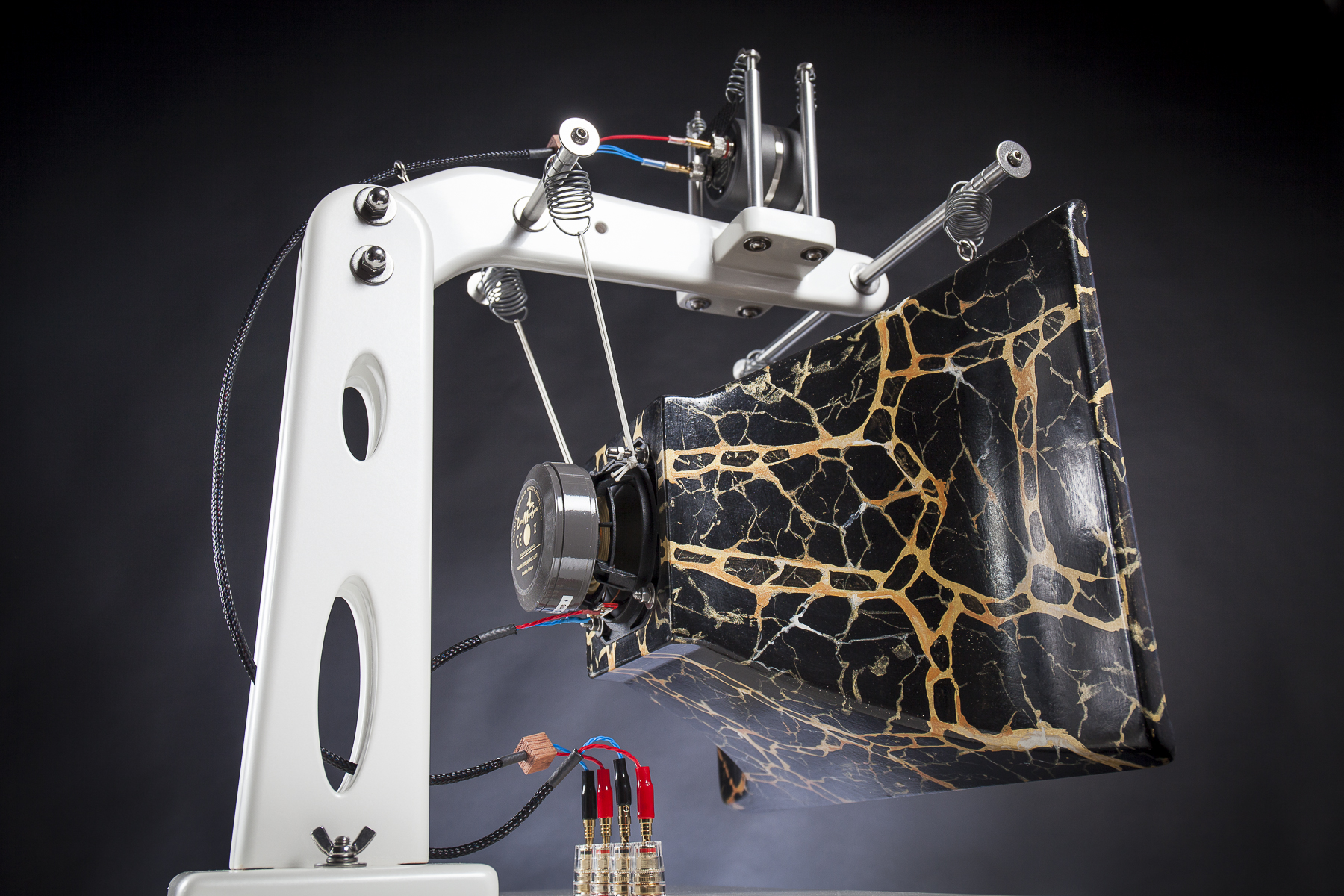 On the other hand, the high efficiency designs proposed during the years when valve devices became popular again often shed a bad light on this kind of diffuser. The reason being that these have been implemented by transductors from the professional field, with characteristics unsuitable to our purposes. Indeed the high sensitivity of these loudspeakers is accompanied with low flexibility suspensions and heavy mobile equipment which must ‘digest’ hundreds of Watts. In fact an audio system with low transduction efficiency inexorably deteriorates the signal and therefore the sound reproduced will irremediably have higher dynamic compression, low ability of emotional involvement and finally infidelity to the original sound event.

Thus it is of the utmost importance to use loudspeakers specifically designed for Hi-Fi, with high electro-acoustic transduction efficiency. We have the Know-How as well as the technology. Clinamenaudio channels and guides the best loudspeaker designers to build custom components for their range of audio diffusers. These loudspeakers have low power handling, a subsequent low weight of the mobile equipment, medium flexibility, high quality paper membranes, sophisticated magnetic circuits and in the top of our production with excited magnet.