Clinamenaudio is the only company that produces Integrated Monoblock Amplifiers. We would like to explain the reasons that drove us towards this particular configuration.

What is I.M.A.? These are amplifiers that don’t need a line preamp. Their sensitivity is such that they can dispense the maximum power without any added gain unit to support them. They are equipped, like any integrated amplifier, with a commuter for the selection of inputs and volume control. The other particular feature is that they are monophonic units; thus for stereo listening we need two IMA units.

Below the technical reasons that support the IMA topology.

In the Clinamen perspective of creating pure amplification with power of around 10 Watts (definitely sufficient if they are interfaced with medium-high sensitivity loudspeakers) built around intrinsically linear and efficient active devices, we can optimize many circuit, design and musical parameters. In other words this means that in the IMA units we can drive the final stages of power with only one active device, with all the advantages that follow. This is achieved with a high trans-conductance triode that can combine high gain and low driving impedance and operating point rigorously in class A.

In this perspective the line preamp is a redundant element, bearer of distortion, sound bloating and euphony. 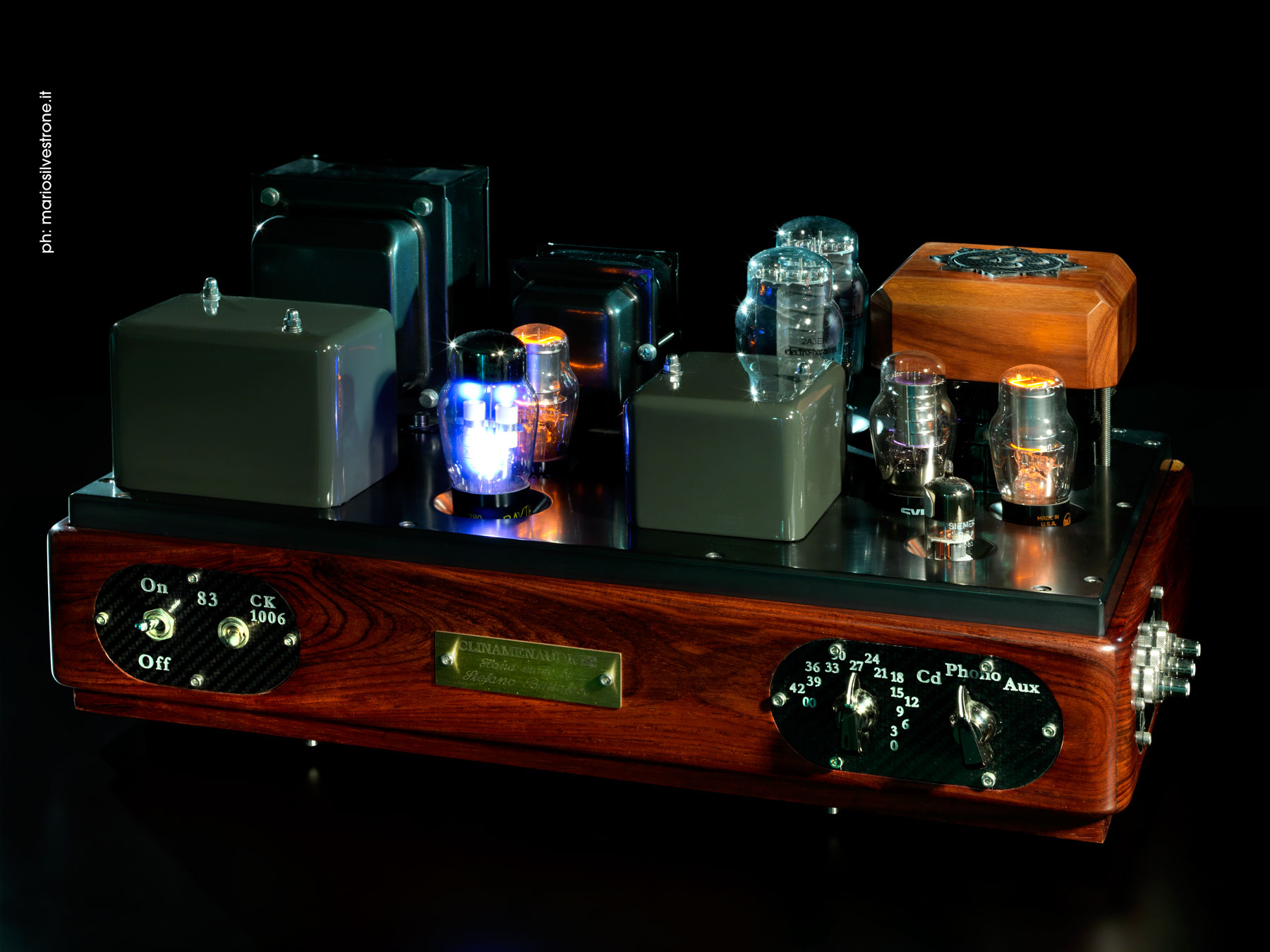 We need to consider that modern digital sources have high level outputs, around 2 RMS Volt and that many audiophiles don’t listen to vinyl records; thus the most logical choice in the view of maximizing the value for money is to eliminate the line stage (and all the cabling necessary for its connection) and to invest the whole budget into an integrated unit designed around extremely efficient active elements (high trans-conductance triodes).

The audiophiles who listen to vinyl records can add a suitable phono unit to the IMA units.

Clinamen also wants to debunk the myth about audiophiles preferring audio systems that work with the volume knob quite ‘closed’, let’s say around 9/10 o’clock, because according to them, there is then a certain quantity of power left to turn the volume up and give energy to dynamic peaks. This is a big judgment mistake! In fact,  the available power is only given by the configuration and polarization of the final stage of power, whilst the volume control works almost exclusively on the attenuation of the level of input signal.

A potentiometer never directly controls the gain of a stage, which is fixed, but only the level of the input signal.

Thus if our system works with a very closed volume knob it means that we have a very high total gain and a very high attenuation on the input signal of the amplifier, achieved through the volume potentiometer (which is a resistive, continuous or discreet divider).

This reasoning doesn’t make much sense; in order to achieve a very high gain we must endure many collateral effects, such as the thermal noise, the chance of instability (managed through retroaction) and distortion. Having high gain and not using it because we input a strongly attenuated signal is an unsound logic.

Furthermore, a potentiometer in strong attenuation introduces on the signal’s path a very high series resistance and this greatly limits dynamics and introduces timbral hues.

It seems absurd to worry about the sound of cables, whose series resistance is close to zero for all of them, when in the grid circuit of our amplifiers we have tens of KOhms of resistance introduced by volume potentiometers in strong attenuation. Clinamen solves this issue at the base; we use inductive and non-resistive volumes (I.V.C. : Inductive Volume Control).

All the Clinamen amplifications always work with the volume knob after 12 o’clock. This does not mean that there isn’t any power reserve, but simply that the whole system (loudspeakers included) has been optimized to have the highest musical performance.

We need to explain, now, why the Clinamen amplification units are monophonic as well as integrated; the reasons are based on practicality and quality.

Indeed our amplification systems aim at following the natural path of sound; thus they have many inductive elements (signal transformers, filter coil power supply transformers…). In order to optimize the layout, distribute the weight and ease the manageability of the units as well as give them a more elegant look, they are doubled. This also brings a few advantages from the sonic point of view, since the total separation of power supplies guarantees great dynamics, crosstalk and spatiality in the recreation of the musical scene.

The CLINAMENAUDIO "DHARMA" model (2 A 3 MESH) only implements I.M.A. technology. 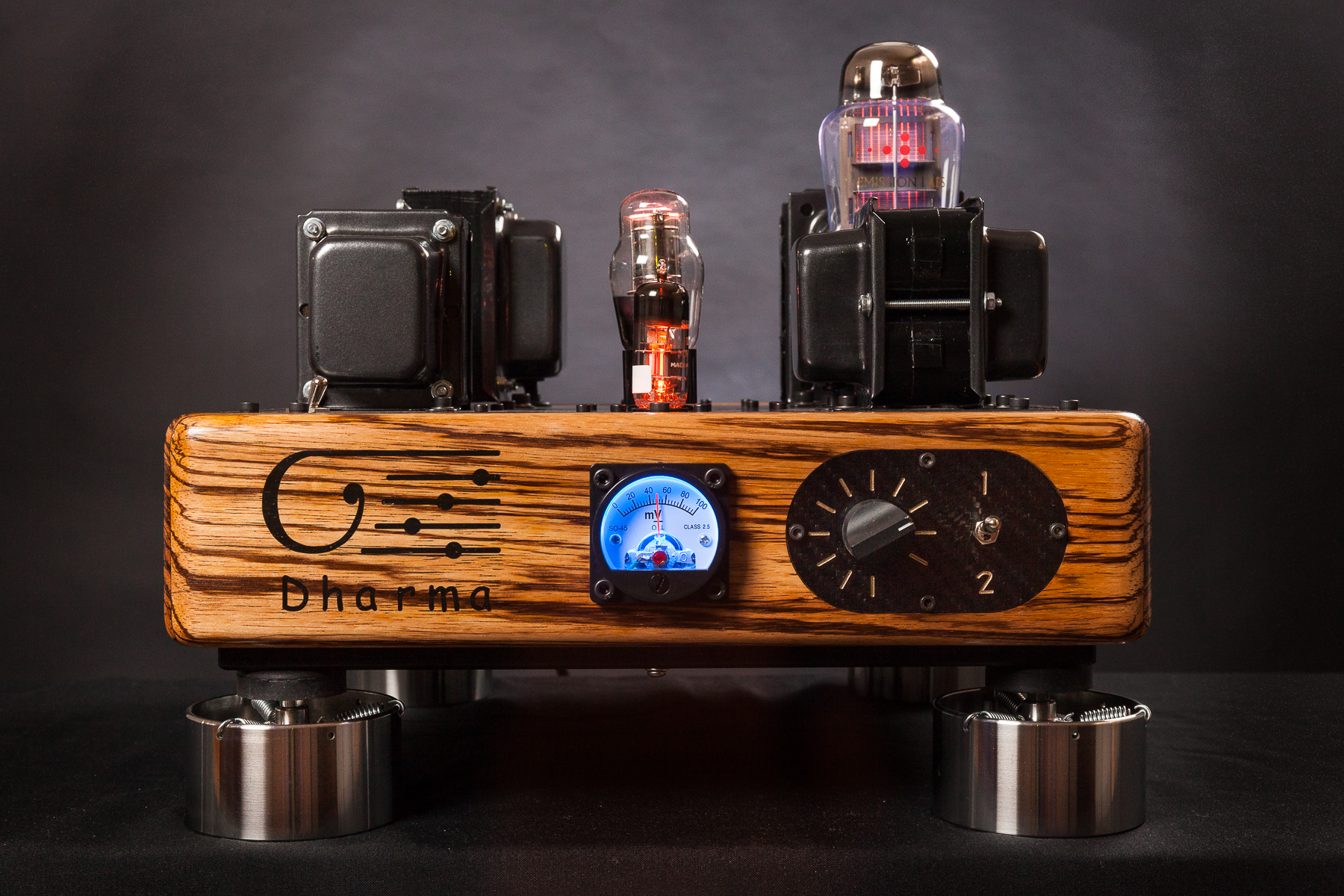